William Lever wanted to reform the lives of working-class people. He built single family homes with sanitation and gardens, in contrast to the over-crowded industrial slums common in the late 1800s. Port Sunlight looks as it does because he also invested heavily in beauty as a means to improve his workers’ lives. He held architectural competitions to design many of the terrace blocks and 29 different architectural practices contributed designs to the village during his lifetime. No two terraces in the village are the same. 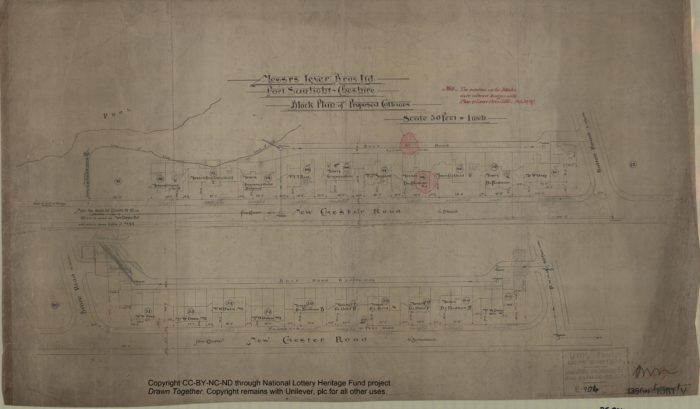 Block plans, like this one for New Chester Road, include the names of the designers for individual terraces.

Here, you can browse some highlights from the digitised plans in the Drawn Together collection. Or use the Find a Plan search function on the home page to find a specific plan.

“It is my hope, and my brother’s hope… to build houses in which our work-people will be able to live and be comfortable. Semi-detached houses, with gardens back and front, in which they will be able to know more about the science of life than they can in a back slum, and in which they will learn that there is more enjoyment in life than a mere going to and returning from work, and looking forward to Saturday night to draw their wages.”

Reforming the lives of Port Sunlight’s working-class people was at the root of William Lever’s business model for Lever Brothers. He thought sanitary housing, cottage gardens and single-family homes were essential. He wanted to lift people out of industrial slums, illiterate rural poverty and drunkenness. Which were things he and other Victorian industrialists associated with British working classes. In turn, he expected his Port Sunlight workforce to follow strict tenancy rules. He thought his approach would create social benefits like better health and upward mobility for future generations. He also expected to get greater productivity and loyalty for his investment.

William Lever had a strong aesthetic vision and he invested heavily in beauty for Port Sunlight. You can see this in the residential architecture of the village. The architecture shows every British domestic revival style, except for the Georgian style. Often, different revival style terraces sit next to one another. This gives the impression that the village developed over 100’s of years, rather than the 50 years it actually took to build (from 1888-1938).

Twenty-nine architectural practices contributed designs to the terraces and semi-detached houses in the village during Lever’s lifetime. No two terraces are alike. This is partly because Lever organised design competitions for terrace blocks. Pitching one architect’s plans for a site against another’s.

Although all the houses are different on the outside, inside there are two typical plans for the arrangement of rooms. Kitchen cottages have a kitchen and scullery on the ground floor and three bedrooms on the first floor. Parlour cottages have a kitchen, scullery and parlour on the ground floor and three or four bedrooms on the first floor. All the houses had hot running water in the scullery and most had outhouses. A few terraces had toilets in the main house, but these were accessed by a door in the yard rather than an internal door.

Architectural variety and quality materials were used at the front and sides of the houses. The backs were simpler and more uniform, yet their design still contributes to the architectural character and significance of the village. These uniform materials and design are more typical for worker housing and planned communities around the world.